If there’s one thing undeniable to every “audio enthusiast” out there, it’s that speakers are, undeniably, the most important part of the system. They have the biggest (some would argue the only) effect on the sound. That’s a topic for another day. Today, we’re talking about a rather wonderful two-way monitor.

Prior to a couple years ago, I head never heard of Selah Audio. In fact, I was rather blind to the would of smaller boutique style manufacturers. Philharmonic, Salk, Ascend, Selah, the list goes on. It was on my quest to get more bang for my buck that I made the discovery. I remember seeing the praise that these shops, and wondering “why aren’t they bigger if they’re so well loved?”

If was this question that led me to even more research. Surely I must be missing out on something? Or maybe all of the followers are just crazy. No, it wasn’t the latter. Eventually, I came to the decision that I needed to hear these speakers for msyelf. Being in the Dallas/Fort Worth area, the natural candidate was the Lone Star Audio Fest (or LSAF for short).

Fast forward a few months, it was the opening day. I went to LSAF with a list of manufacturers I wanted to hear. Among them was Raven Audio, Volti Audio, GR Research, and of course, Selah Audio. I didn’t know anything about them other than they were, I kid not, loved by their fans.

Looking back, LSAF was my ideal show to wet my toes. Instead of being purely about showing the latest and greatest, everyone there is wholeheartedly about having a good time. Some were even handing out free beer! There wasn’t a single person I talked to that didn’t have that “Southern Courtesy”, something that is often hard-to-find outside of the lower United States.

Out of all the rooms I visited, there were two that I went back to. Selah and Volti Audio. They both kept my attention for entirely different reasons. With Volti, never before had I heard horns like that. They had an unfinished pair of Vittora’s on display. They were, for lack of a better word, effortless to listen to. They sounded so easy on the ear, without a hint of harshness that I would normally attribute to horns. The bass was deep and quick. While they were the most expensive speakers I listened to that weekend, I could see myself parting with some hard earned cash if I had the money for them.

I’ve got to be honest about Selah audio. I was kind of thrown off by the name. I didn’t make any sense to me, so I was a little biased going into the room for the first time. It’s a mistake I’ll be sure to not repeat. On display, they had two completely different designs. One was the Ritorno, the very speaker I’m reviewing here. The other was the Omaggio, a radical line array based on sonar wave propagation research done by the Navy in the 70’s and 80’s. Cool stuff!

Coming back to the Ritorno, it was a speaker that truly defied my expectations. It had bass that exceeded what I thought possible from a two way design. I am used to listening to three or four way speakers, so the idea of a two-way seemed a little dated to me for a reference system. That doesn’t mean I don’t think two ways can’t make great speakers (the can!), but that I had been in the world of 3-4 way systems for so long that I had completely forsaken the venerable “lesser” speakers.

I remember listening to the monitors for the first time with my friend, and we both a joke was being played on us. We were under the impression, at first, that the sound was actually coming from the speakers in back (the line array). Joke’s on us. It really gave us a pause to think about what that meant. They were entrancing. That ribbon tweeter was truly a delight.

Taking a look at the aesthetics, they are are either love-it, or hate-it. The faceted design of the monitors serves a very specific purpose, but in some circles the design is dated. <explain facets>.

And make no mistake, these are girthy monitors. You would be remiss for thinking these look smaller than they actually are. It’s not until you see them in person that you can truly come to terms with their size.

A Word on Specifications

At the time of this writing, the Selah Audio Ritorno is currently the cheapest stereo pair of speakers currently offered by Selah. By happenstance, they are also the only two-way monitor, but that doesn’t mean that are the worst performing! As I don’t have measurement gear yet, I’ve went ahead and borrowed one of the graphs provided by Rick Craig on the site page for the Ritorno.

Overall, the Ritorno provides very even frequency response, with the only notable drop in high frequency starting between 15-30 degrees off axis. What this tells me is that this speakers will need a good amount of toe-in. For critical listening, I had mine setup so that they were pointing a few feet behind my ears.

Speaking of the stands, they come with spikes or rubber feet. With the rubber feet installed, the center of the tweeter sits 39″ off the ground. I found this to be ever so slightly high for my listening position (38″), but at my listening distance I knew this wouldn’t pose an issue.

I’ve had these speakers in my system for a while now, and I feel like I’ve really gotten the chance to know them inside and out. but I’d like to share my thoughts on some of my favorite albums during that time.

To start off the evening, I started with Wax Tailor’s “In The Mood For Life”. His junior effort, this album came about after his name really started to take off after the previous album. On a whole, I feel like this album does a great job of appealing to a wider crowd than his previous efforts.

The first thing that becomes apparent when listening to this album is the wonderful layering that Wax Tailor is famous for. The Ritornos lay bare the sound-stage, leaving nothing to interpretation. The first track this becomes immediately obvious on is Dry Your Eyes featuring Sara Genn. The bass rhythm plays in perfect harmony with the singing. The speakers really dig deep here, showing their ability to play not only clearly, but with great precision. Sara’s voice is seductive in a way and just invites you in to relax and open a cold one. Not saying I did, but I may have done just so.

Let’s also take a moment to talk about the tweeter (again). In my opinion, it’s the true star of the show. The ceramic driver is fine in its own right, but the tweeter really carries the performance. A problem I’ve often found with ribbon tweeters is that they, more often than not, sounded like you were in the front row of a performance. This isn’t a bad thing if that’s what you’re looking for, but a side effect of that is that I feel they lose a little bit of their three dimensional imaging. This BZLabs tweeter though sounds more like you’re a few rows back. And it’s awesome.

As I became more familiar with these speakers, it became even more apparent that these speakers were capable of not only rendering the nuances, but also rocking out when required. I often found myself turning them up just a bit more than usual, much to the dismay of my wife. But can you really complain when the kids are dancing?

Speaking of rock, the next album on the list is an older offering from Nightwish. My favorite album to go back to is their “Oceanborn”. While I do still enjoy their latest releases, 1997 – 2003 holds a special place in my heart. Now that I think about it, this album is over 20 years old. How time flies!

Back to the music, with Nightwish the Ritorno shows that it is more than capable of meeting expectations. If there’s one thing that I feel Nightwish does better than anyone else, it’s that beat from the drums. And the 8″ driver has no trouble keeping up. Closing my eyes, I would even be mistaken for thinking there was a pair of subwoofers present.

Taking a look at the other spectrum, female vocalist Tarja really gets to show her skills. Her voice was rendered wonderfully in front of a musical backdrop that demands your attention. Even my wife had to stop and listen, which is rare since this style of music is well outside of her norm.

Last, I’d like to speak about John Butler. To those that know his work, Ocean is a sacred piece. An ever-evolving piece. he’s mentioned that it changes based on the world around him and his experiences up to that point. Even though it changes, you can always tell it from the rest. My first introduction to him was in 2006, when I visited Switzerland for foreign exchange. One of my foreign exchange family’s gifts was his “Live at St. Gallen” album, which was released less than a year prior.

Anyways, back to the music. In 2016, John released an Ocean single. Just him, his guitar, and a glorious 12-minute track. But how did it sound? The first time I played it on the Ritorno’s, it not only gave me goosebumps, but nearly brought a tear to my eye. Even though this single is one that I’ve listened to dozens of times before, the realism presented by the speakers was truly something to behold. It was very easy to discern a three-dimensional sound stage, and even follow John’s hands across the fret board. The last time I had that reaction was with my reference Rega RS10’s. That’s not a fair comparison though, since they retail for six times the price!

Rick Craig really nailed this one. These Ritorno 2-way monitors are insightful and downright fun to listen to. They never failed to keep my attention and always delivered that foot tapping, seductive performance that just kept me coming back for more.

In the right room, these go as deep as you could ask, never giving you the impression that they needed a partnering subwoofer. I can recommend the Ritorno without hesitation. It’s a speaker that makes you question the “audiophile” establishment in regards to what can be had at a given price point. Were it not for WAF issues here at home, this speaker would have definitely joined my reference system for a much, much longer time. 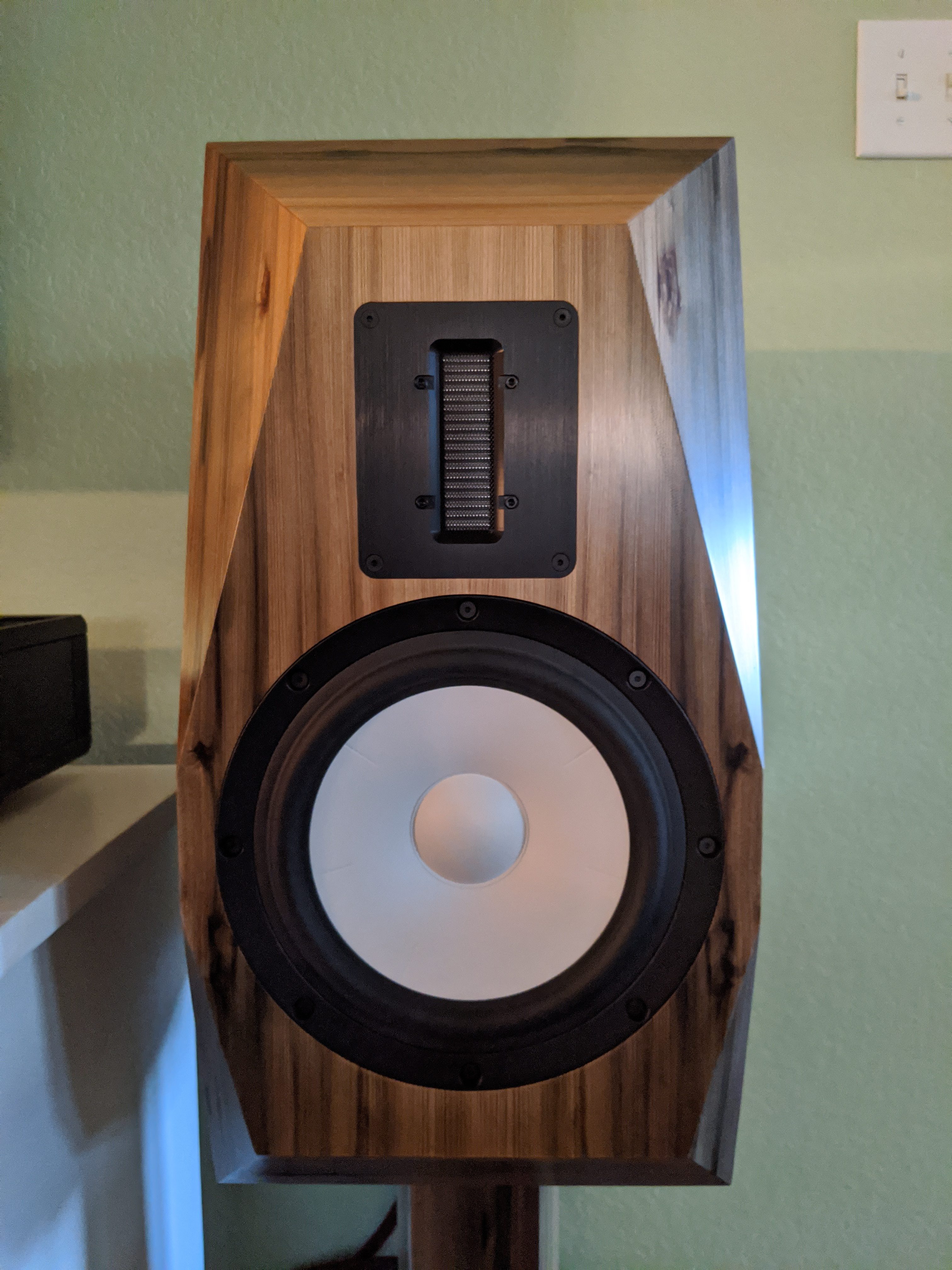