It took me a long time to come to terms with subwoofers and the role they played in stereo playback. For the longest time I held the belief that the only bass you needed was what came out of your speakers. Need more bass? Get bigger speakers. In a sense, I sounded very Texan at the time – go big or go home. The only time a subwoofer was allowed was when dealing with something home theater related.

Speaking of home theaters, the new house we moved into has a dedicated media room that I will be using as my primary location for both audio and video (at some point) equipment reviews. It’s not suitable now as there isn’t any room treatment, but that’s a topic for another day.

The hi-fi shop whom I frequented at the time (and still do today occasionally) is responsible for changing my opinion on subs and convincing me that it’s okay to marry the two, as long as it’s done correctly. The first stereo system I ever heard with “sub-bass augmentation” was a pair of Proac D2’s paired with REL’s. It was a double whammy of new for me; not only had I never heard a stereo system with subwoofers, but I honestly didn’t know stereo subs were a thing. Shows you how much I knew about audio.

It was an eye-opening experience in two ways. First, I didn’t know subwoofers would actually make music. In other words, I had never known a subwoofer to not sound bloated at the time. Remember, I was very early into my audio game, coming from a group that enjoyed that bass-emphasized sound.

Second, stereo made a much bigger difference than I thought it would. Having the demonstrator switch from single to dual subwoofers yielded an immediate and appreciable amount of gratification. A few hours later I emerged from the demo room a changed man, as it were. While I wasn’t about to change everything I knew and go purchase a subwoofer, I definitely had a greater appreciation for them that was previously missing.

The focus of this review is the newly updated REL Tzero MkIII. This is the entry-point into REL, being their most affordable product. At $450, it’s not exactly cheap, nor is it expensive. For what you get, I think most would pass and move onto something from other popular internet-direct subwoofer manufacturers. And I can’t blame them. By most standards the Tzero isn’t really a subwoofer with its (relatively) small 6.5″ driver.

Combined with its 100 watt Class-D amplification, I would go so far as to say this little guy is “cute”. And I think that’s where the appeal really comes from. It isn’t marketed towards home theater aficionados or bass-heads, but those looking to simply supplement the lowest octave in a way that not only looks great, but does so with an incredibly small footprint.

Indeed, the footprint is tiny, coming in at 8.5 x 9.5 x 10.5 inches (WxHxD) and only 15lb, it could easily be looked over by passer byers. That’s where I “fell in love” you could say. It was the only product that did what I wanted – supplement the low end on my monitors – while staying nice and neat.

I know everyone has repeated this a thousand times, but I’m here to do the same. The magic of REL lies in its low-pass filter when connecting via a high-level connection. If you’re wondering what I recommend, it will be the same as everyone else, but for good reason which I’ll get to at the end.

This review is rather unusual in multiple ways. In that sense, it has taken me far longer than I would have preferred to write this review. First, I recently moved into a new house and the dedicated music room is far from completion. I have already ordered panels but it could be a few weeks before they get in.

Second, the components for the majority of the review have been non-standard. I’m still using my tried-and-true Audial S4 as a digital source, but my reference Osiris has been temporarily replaced with the S4’s sibling, the Model A Premium stereo amplifier. It’s a wonderful little piece that I can’t wait to talk about soon.

On the speaker front, I’m running my favorite Arteluthe La Piccola monitors. Since listening to them, they have become my reference stand-mounts when my Rega RS10’s aren’t available (many thanks to my kids). That then leads us into the REL Tzero MKIII, the focus of this review. They are connected to the Model A via the high-level input and have been calibrated both by ear and calibration microphone to get the crossover point just right.

A (now) standard album in my review repertoire, Abraham Alexander’s self titled EP represents everything I like to hear from a good setup. It has the lows to highs, a great soundstage, a seductive melody and the singer himself is a master vocalist.

Starting with the opening track “Lover’s Game”, the REL’s do a great job keeping up with the La Piccola’s, delivering a convincing low-end that I almost mistook for coming straight from the standmounts. In this setup, they’re playing on a hardwood floor, and so benefit from that coupling. Though I found the bass extension to be more than sufficient for my listening, I imagine some would prefer a deeper presentation. It needs to be understood that despite …

Moving onto the second track, the REL shows that it’s capable of delivering a spaciousness that I’m having a hard time quantifying. Was I hearing an open space? Or was that indicative of improperly setup subs. I had to pull out my measuring microphone again to triple check – yep, everything was good to go. To fool me in a way that made me believe something was broken! I thought I knew the track inside and out, but it’s nice to get the occasional surprise.

Next on the docket was Leon Bridges. A similar’esque style to Abraham, Leon Bridges holds a special place in my heart since my wife and I danced to one of his tracks at our wedding. That, and it’s hard to not support local artists. His second album took some time for me to warm up to, but now it’s one of my reference albums for judging any piece of equipment.

No matter which track I listened to, the REL’s did an extraordinary job of providing that deep beat that may have been otherwise lost. That’s not to say that the La Piccola’s were lacking in bass – in fact I think their output far exceeds their size. But the REL’s added that extra bit of depth that took the recordings to the next level. While I never had the thought that I was listening to my reference Rega’s, it was still exceptional in its on right.

“Beyond” has always stood out to me. Speaking purely on the performance of the REL, relative to the equipment they were paired with, I can say that they surprised me. The timing was spot on with the monitors and they never gave a sense of being pushed too hard, even with the volume turned up to uncomfortable levels.

As I continued listening to the album, I kept on coming back to an initial thought with the REL’s – trading size for speed. I don’t tend to talk about “speed” or “pace” when speaking of electronics because I think it’s something that is fairly hard to quantify. That said, I can say without a doubt that these tiny REL’s excelled in becoming one with my monitors in a way I’d never really experienced prior.

For the final album, Retrograde by James Blake, I moved the subwoofers up to my (still in-progress) media room to see how they sounded on carpet. I quickly moved them back downstairs. I’ll call it out right now, I did not like how these sounded on carpet. I’m going to attribute that to only being down-firing. If you have carpet and you want a REL, you will be much better served by one of their forward-firing models. Okay, back to the album.

It wasn’t until this album that I began to see the compromises for what they were. Being a 6.5″ driver, they are simply incapable of hitting those deep chords that I expect to hear. I found this to be a minor disappointment overall, but wanted to bring it up since some listeners will care more about depth vs how well they (the subwoofers) integrate with the primary speakers.

To put it simply, I can summarize my experience with the REL Tzero MKIII’s fairly simply. During my tenure with them, I came to the conclusion that “where it’s the responsibilities of the speakers to draw you in, the subwoofer keeps you grounded in your seat.”

Yes, there were times where I hoped for deeper bass response, but this was few and far between as most of the music I listened to didn’t call for that bone shaking depth.

Overall I fell in love with these little REL’s. They’re small, WAF friendly, and in the right circumstances would be all you’re looking for in a two channel system. While the list-price isn’t cheap, it also isn’t expensive in the world of hi-fi. Bought as a pair, many retailers will offer a discount that lessens the blow.

If you’re looking for a small subwoofer and aren’t going to place it on carpets, I can whole-heartedly recommend the newest iteration of REL’s smallest sub. 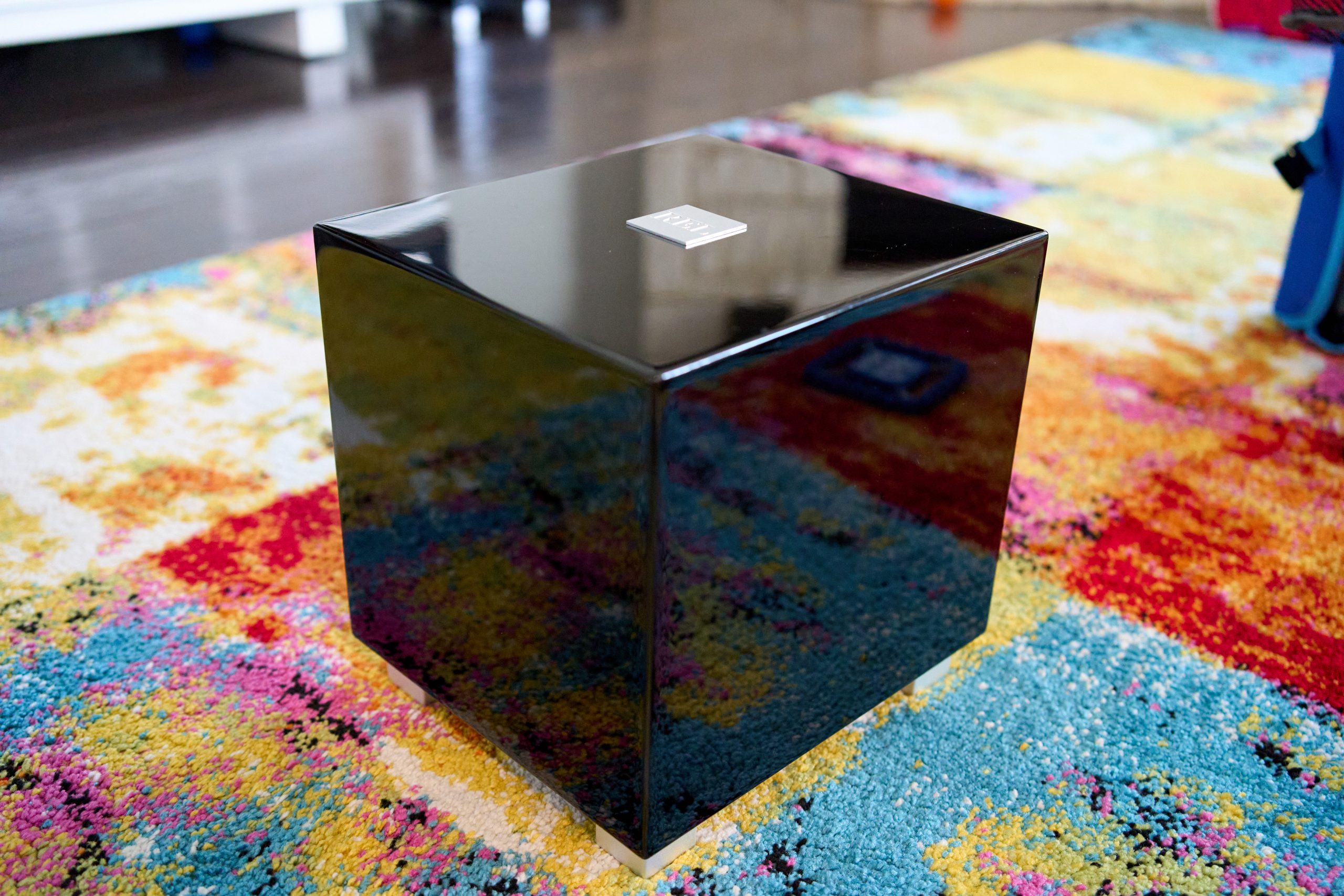