It was inevitable that another vacuum tube amplifier would make its way to my doorstep. Despite the naysayers, it is hard to deny the divine nature of tubes and the sound they produce. I know, I know. Solid state is superior and it’s possible to replicate the sound profile of vacuum tubes. I completely believe that and yet I’ve never found myself preferring an imitation to the real deal.

In my eyes, it’s akin to preferring imitation crab when eating sushi. No one wants that. Unless you’re my son – he just doesn’t know any better yet!

I first caught a glimpse of the predecessor of today’s subject a few years back – the SQ-N100. Even then, I thought it was a fine looking unit and I oft found myself lusting over its simple yet refined aesthetics. In some ways it reminded me of my Rega Osiris, though the latter is for sure more utilitarian and divisive in its looks.

Fast forward and I now have this SQ-N150 in my house for review. Somehow, Luxman managed to improve the aesthetics while still maintaining a footprint somewhere between a standard A3 and A4 piece of paper.

I want to take a quick moment to talk about the specifications of this little unit. Unlike the Muzishare X7 that I reviewed a while back, the tube complement here is quite svelte in comparison, consisting of two 12AX7’s and a quad of EL84’s. While the power tube push-pull configuration hasn’t changed from the predecessor, I was a little disappointed to see the preamp and splitter section change.

Strictly looking at the inputs we see three line-level inputs and a single phono stage. To the left of those are the speaker taps.

While the 12AX7 is perfectly capable of driving two EL84’s (per channel), I tend to prefer an extra driver stage using something like the 12au7 or 12bh7. The counter-argument for only using the 12ax7 is that it will be less tube’y and a bit flatter of a response. That could be what Luxman was going after, as the 12ax7/12au7 combo is a fairly popular configuration, made famous (in my opinion) by the legendary Leak Stereo 20.

I also found it interesting that the predecessor to today’s subject also used this configuration.

The amp comes in at a rather hefty 27 lbs. Every time I move it, I’m surprised by how dense the unit is. Whereas weight isn’t always the best indicator of quality when it comes to a solid state amplifier, the same cannot be said of vacuum tube amplifiers. I will talk about why in the next section.

Luxman rates the SQ-N150 to put out 10 Watts (into 6 ohms) at less than 1% THD. Rating vacuum tube amplifiers at 1% is fairly standard, and these numbers are believable for a pair of EL84’s. It’s definitely possible to squeeze more out of them, but that tends to suck the life out of them – figuratively and literally. Not only will the sound be harsh (think guitar amp), your faithful EL84’s won’t last as long.

The remote control is rather full featured, including everything short of a power button, which is understandable given the nature of this amplifier. Aside from the battery cover, it’s made out of aluminum and has a good weight to it. I would give it high marks, but the plastic battery cover lets it down in my opinion. Seems a small oversight for something that is otherwise very well made.

There’s a quarter inch headphone output at the front which I also reviewed briefly and will talk about later.

For the un-initiated, there’s a reason vacuum tube power amplifiers are often accompanied by big and heavy transformers. As much as I’d love to just say that it makes them sound “more better”, I know that won’t do (even though it’s true). Before getting started, I won’t ever claim to be a subject matter expert on vacuum tubes, transformers, and the likes. So please don’t take anything I say (or write) as the gospel. That said, I do enjoy the hobby and have done my fair share of research, listening, and experimentation to not get myself completely underwater.

Taking things from the top, unless you are using a non-standard topology (looking at you Linear Tube Audio), transformers are a necessary part of the equation to adapt the relatively low impedance of a speaker (4-16 ohms nominal) to something more tube friendly, usually in the several thousand ohms. At a very high level, a transformer achieves this by having two sets of windings – copper wire wrapped around a core that’s usually made of iron.

The input winding is called the primary while the output secondary. I won’t go into the math, but the size of the wire, the number of turns (times it is wound around), etc, are all used to determine the relationship between the primary and secondary. It’s this relationship that allows a transformer to step-down the output impedance from the vacuum tubes to the input impedance of the speaker.

Okay, back to the size of the transformer. Generally speaking, the larger the transformer, the longer it will take to saturate which means less distortion and more headroom. This isn’t a golden bullet though, as a transformer still needs to be sized correctly to the vacuum tubes.

There isn’t much to say here other than it should be immediately obvious that the build quality found here trounces what I’ve seen out of some cheaper vacuum tube amplifiers.

This is one of the few reviews where the amplifier made the rounds throughout my house. In total, the SQ-N150 was used in three different systems which I’ll touch on here briefly.

For the majority of the review, the SQ-N150 was paired with my trusty Audial S4 which I reviewed here. For the speakers, it’s paired with the reference Q Acoustics Concept 500’s. They’re also relatively new and I can’t wait to talk about them in the coming weeks. For the first time in a while, I did not make use of my Rega RP10, so this review is entirely through the S4.

First up in my review playlist is a track that I come back to time and time again. I have on both vinyl and digital – they both sound excellent for different reasons. Ocean by John Butler

One thing this track always does well is easily allow one to visualize how well an amplifier presents a soundstage. How much crosstalk is there? Is it possible to pin-point where John Butler’s hands are on his guitar?

And how does the SQ-N150 perform here my might ask? Lovely. I have no issues following what is happening. The first time I played this track on the Luxman, I actually put down my notepad – my attention was demanded

From beginning to end, the Luxman continued to impress with how well it kept up the guitar strokes and the general dynamics of his music. But then again, I would expect tubes to excel at this type of music.

Next up is Bob Moses

This artist is a new one for me to talk about. Not that I’m unfamiliar with his music, but rather it usually doesn’t make an appearance in my critical listening. Usually I can find something else that does a better job at a particular facet that I wish to evaluate. No, this doesn’t mean his music is average. In fact, I find it almost trance-ful with his melodies and bass lines, if that were a word.

In particular, I want to focus on “Tearing Me Up”. Circling back to the make-up of this vacuum tube amplifier, while the EL84’s are certainly capable of reproducing notes in the lower octaves, it’s not something that’s readily attributed to them. Ensuring it’s tight (and stays that way) falls to the output transformer. Okay, back to the review.

While I don’t often use this track in a critical listening sense, I do love to use it for judging the quality of the low end. It’s not so low that normal speaker couldn’t reproduce it. Yet it’s low enough that you can tell when something isn’t quite right. Well, I’m happy to report that all seems to be good in this department. The SQ-N150 proved capable here at reasonable volumes. At no point did I find myself thinking the bass was muddy or not well defined.

If anything, I would say that the bass was slightly over-emphasized (ever so slightly) in its frequency response. Again though, I think this is a common trait of vacuum tube amplifiers. It’s not enough that I’d call it out outside of this comment though.

Let’s move onto something a little bit more lively. More recently I’ve found myself coming back to the Bleacher’s MTV Unplugged album. Some amplifier types seem to sync with certain types of music – I don’t think most will disagree there. This album is one that the SQ-N150 really shines in my book.

This album really rocks. Done. Next.

Okay, let’s really talk about it. Part of the allure of this album for me is the live aspect of it. And it was well recorded. The latter plays a big part in any recording, and its the stereo system that’s responsible for recreating that in a realistic way. Well, I can tell you now that compared to my Osiris, the SQ-N150 sounded more realistic.

But it wasn’t all roses compared to the much beefier reference amp. The Osiris, being solid state, had much better control of the lower frequencies. The highs were also flatter compared to the SQ-N150, where I found them to roll off after 15khz or so. A meter confirmed this in my room.

The only thing I can find fault with is that the tubes, while being user replaceable, aren’t auto-biased. The biasing is found under the bottom cover. While this isn’t the biggest issue, it does make swapping vacuum tubes a little less fun.

All that means if that you should have your multi-meter ready!

This review has been a a long time coming. It wasn’t until several months after receiving the unit that I was actually able to critically listen. During that time, it lived in either my office or living room and in both cases it didn’t get the attention it deserved.

Aside from a relatively low wattage per channel, I find myself drawing blanks when looking for downsides. The SQ-N150 proved again and again to be a capable performer. Mids and highs were always splendid and never caused any fatigue to my otherwise sensitive ears.

Only when pushed towards the limits of what 12 watts did the bass get sloppy. Leading and trailing edges no longer became defined and 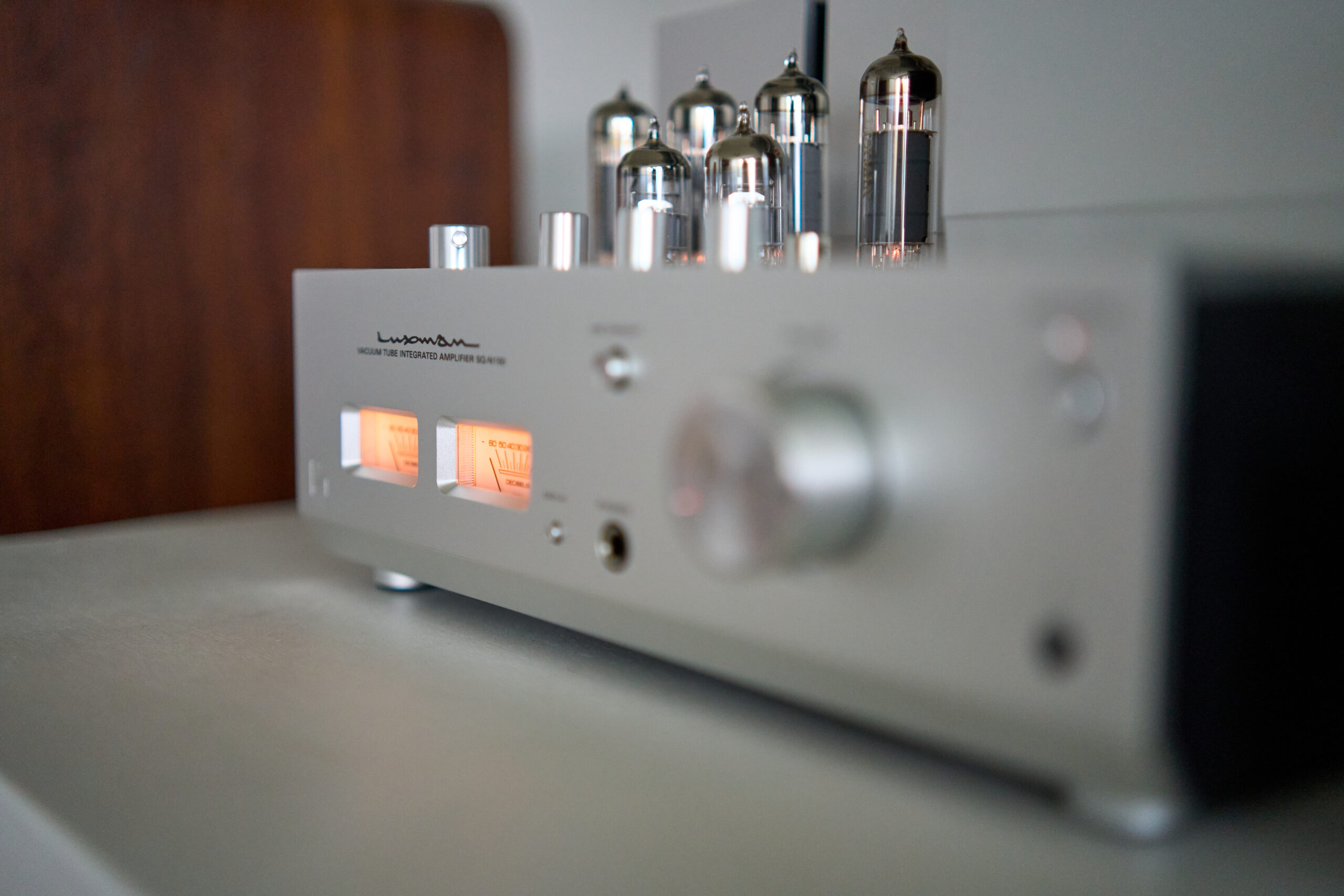